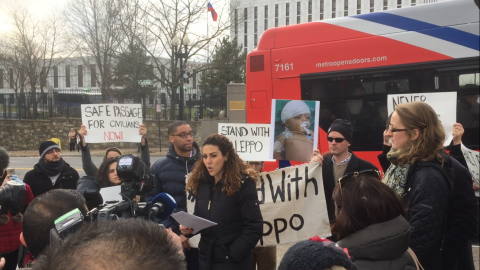 (Washington, DC) – The American Relief Coalition for Syria, a coalition of 13 humanitarian and development organizations that aid 5.7 million Syrians worldwide, in coordination with the Coalition for a Democratic Syria, a multi-ethnic and multi-sectarian coalition for a pluralistic and free Syria, organized a press conference in front of the Russian Embassy today in Washington, D.C.

“ARCS, CDS, and the Syrian, Russian, Baltic, Ukrainian, and Iranian American communities are demanding an immediate ceasefire in Aleppo now. We demand the protection of civilians and a guaranteed safe passage to civilians, especially the injured and medical personnel. We demand that our government applies pressure on the Russians and Iranians to end the constant and indiscriminate aerial bombardments, the field executions, and the mass torture and rape. A humanitarian and development organizations, we demand that we act now.”

Darren Fenwick, a human rights activists and a member of CDS, stated:

“For the sake of the Syrian people and our collective humanity, the Administration should work with our allies to protect Syrian civilians through safe zones, air drops, and targeted sanctions on the Russian, Iranian, and Syrian governments, who are committing crimes against humanity.”

Michael Sganiw, the director of the Ukraine Congress Committee of America, said:

“We, as the Ukrainian Americans, have an obligation to stand with the people inside Aleppo and against the Russian and Assad regime’s aggression. We are here today to show our support for the innocent people in Syria as well as Ukraine.”

Photographs and videos can be found here.

The American Relief Coalition for Syria (ARCS) is a 501(c)3 coalition of non-political, Syrian diaspora led humanitarian organizations that provide multi-sector relief inside of Syria, as well as assistance and services to Syrian refugees in regional host countries and in the United States. Together the efforts of ARCS organizations help millions of Syrians, both those who remain in Syria and those displaced as refugees. ARCS programs cover the full range of humanitarian sectors, including health, psychosocial support, community services, education, food and non-food items, protection, water/ sanitation/ hygiene, and women’s empowerment. In addition to emergency relief, ARCS organizations have established development projects that promote sustainable living and lay the groundwork for voluntary refugee return, such as building schools, facilitating jobs and skills training, and helping to establish bakeries and flour mills.

● Hope for Relief and Development for Syria