Syrians in US at Risk of Losing Legal Status 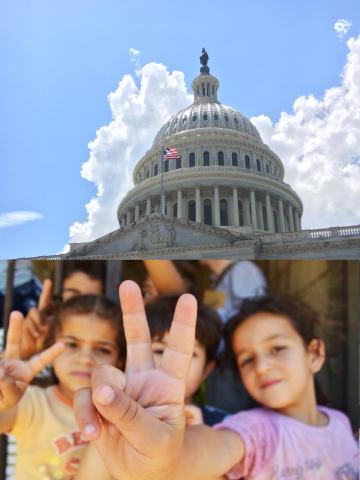 (Washington, D.C. - July 31, 2019) Tomorrow, August 1, 2019, the Department of Homeland Security (DHS) will announce its decision whether to renew Temporary Protected Status (TPS) for Syrians. Today, 7,000 Syrians in the United States are on TPS and an additional 7,000 Syrians in the U.S. who would benefit from redesignation of TPS.

TPS continues to be crucial for thousands of Syrians. It allows them to work legally, resume their lives, and help keep them and their families safe. In the short time that TPS was designated to Syrians, the majority have proven to contribute positively to the U.S. economy. According to a survey conducted by the American Relief Coalition for Syria (ARCS), more than 90 percent of Syrian TPS holders hold a bachelor's degree or higher, and over 75% hold or are working towards a Masters, PhD, or MD[1]. These individuals are highly educated and are located across the U.S. with a majority in the Midwest and with many serving their communities in areas from endocrinology to research on infectious diseases.

“If I go back to Syria, I literally have no home to go back to. My house in Aleppo [Syria] is gone. I’ve lost family members and many friends. Not only that, but I am wanted by the Syrian government just because I provided humanitarian aid to Internally Displaced Persons (IDP’s) in 2013. Now, TPS is providing me, my wife, and three young daughters from returning to a wartorn country,” said Masood, a pharmacist and TPS holder living in Texas.

Today, the escalating violence and persecution in Syria continue to make it an unlivable country. In April of 2019, the State Department issued a travel advisory stating, “No part of Syria is safe from violence.” In places like the Northwestern province of Syria, clashes have intensified in the last few days. Hospitals continue to be attacked and civilians are routinely targeted.[2] Despite clear violations of International Laws, hospitals in Syria have been systematically attacked in sweeping numbers.

“Syria Relief and Development’s (SRD) hospital in Syria, which served a population of over 200,000 people, was directly targeted and destroyed in May, 2019. Despite the hospital being located underground the coordinates being given to UN OCHA as part of the deconfliction mechanism, our hospital was completely destroyed. With the lack of humanitarian aid and the targeting of medical facilities, Syria is not a safe place to return for Syrians yet.” Amany Qaddour, the regional director for SRD.

TPS is set to expire on September 30, 2019. If TPS is not renewed it will leave thousands of Syrians without work permits, valid driver’s license, and access to their U.S. bank accounts. With many Syrians who serve as medical doctors, students, and researchers, it will leave some of our communities in disarray.

Syrian TPS holders across the country are available for interviews today and in response to tomorrow’s DHS decision, including:

The American Relief Coalition for Syria (ARCS) is a 501(c)3 coalition of non-political, Syrian diaspora led humanitarian organizations that provide multi-sector relief inside of Syria, as well as assistance and services to Syrian refugees in regional host countries and in the United States. Together the efforts of ARCS organizations help millions of Syrians, both those who remain in Syria and those displaced as refugees. ARCS programs cover the full range of humanitarian sectors, including health, psychosocial support, community services, education, food and non-food items, protection, water/ sanitation/ hygiene, and women’s empowerment. In addition to emergency relief, ARCS organizations have established development projects that promote sustainable living and lay the groundwork for voluntary refugee return, such as building schools, facilitating jobs and skills training, and helping to establish bakeries and flour mills.

[1] Based on an online survey of around 90 Syrian TPS holders.