A TPS Update from Monzer 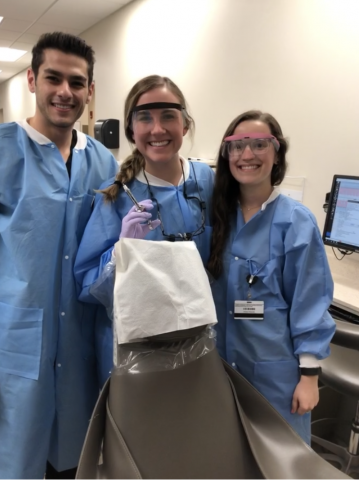 Monzer Shakally is a dental student who came to the US 6 years ago. Last year, Monzer shared his incredible
journey with us, and we caught up with him recently to see how things are going.
Read his previous stories here: https://arcsyria.org/article/monzer-ive-always-wanted-democracy

Monzer is now 23 years old and attends the University’s College of Dentistry and Dental Clinics in Iowa.
Now that he completed his first year of dental school, Monzer has a much-deserved summer break. But
unlike most students who spend their summers relaxing and enjoying time off, Monzer will be working
hard fighting for TPS’ renewal and redesignation.

Monzer participates in the National TPS Alliance, where he advocates for TPS for fellow Syrians as well
as many other vulnerable communities around the world. Although it is stressful and overwhelming not to
know what the future holds, Monzer feels motivated to continue to work on getting TPS extended.

Monzer is able to manage his school work while supporting pro-TPS initiatives. Regardless of a rigorous
school year, Monzer took time off this year to advocate for TPS. To Monzer, school is very important, but
he also factors in the bigger picture. Last semester, he went to DC with the National TPS Alliance to
advocate for TPS. He missed some of his courses, but he believes “the decision about TPS is just too
important to sit back and watch other people make choices that impact mine and others’ lives.”

While advocating on the Hill, Monzer was shocked to hear a story about a mother from El Salvador speak
to her representative. The woman, a single mother of three kids, moved to the US in the early 2000’s to
give her children a better and safer life here. The mother pleaded with her representative, stating that she
was even more worried now about her children. Monzer said the entire room felt overwhelmed by her
dilemma.

She kept saying, “What will happen to my children if I get deported?”

But there was no need to state the obvious: It would leave her 17-year-old daughter, forced to take care of
her two younger children, underprepared and vulnerable. She said her daughter had dreams of college and
a career. But if her mother gets deported, her bright daughter will be forced to become a fulltime mother
and the sole financial provider for her siblings.

Monzer said he got emotional hearing the devastating impacts of how canceling TPS for some people
could ultimately split families, ruin lives, and shatter future dreams. Despite the moving testimonies,
Monzer felt “a sense of comradery” with their fears of the future, which he also feels often. Monzer said
that the most stressful thing about TPS is the “unknown”. He has been in the US now for 6 years, and yet
he still has to live on an 18-month basis (which is the TPS duration per term).

Monzer said, “My entire life literally depends on the whim of another person.” He goes to say,
“Immigration itself is frustrating. But both sides need to hear each other and find a humane decision that
betters communities and families.”

Monzer cannot go back to Syria, and his family cannot come to the US. Monzer wanted nothing more
than to have his mother attend his college graduation last year. Unfortunately, he hasn’t seen his family in
6 years. Once the war started in Syria, his family made a quick decision: have Monzer move to the US
and go to school, or have him stay in Syria with a high probability of him getting kidnapped, forced to
serve in the military, thrown in jail, or killed.

So, Monzer came to the US at 16 years old to Des Moines, Iowa to go to high school and stay with his
older brother. Monzer’s older brother was already an established doctor in Iowa and came to the US on an
H-1B visa from Syria to serve as a physician in an underserved community for 5 years. Monzer’s first
semester of high school in Iowa was very difficult, especially with his English. Monzer remembered
writing on his Facebook wall a few years ago:

“I wish I was in Syria. I feel like I don’t belong here.”

Monzer felt like he betrayed his friends in Syria, especially since many of them died. That was a very
dark time for Monzer.

However, later on Monzer began to love his new life in America.

Monzer’s biggest accomplishment in the US is the new friends he made while working on getting the
HR6 (the American Dream and Promise Act) passed. He loved that he was able to work with such a
diverse and committed group of people. Monzer said, “Those people became like family to me! I felt like
I was part of one big family, and I felt like I started to belong.” He said it was beautiful to see their new
“family” get together, it reminded him of Syria.

He realized that regardless of where a family is from, they are the same. A family’s love transcends all
languages, cultures, religions, and location.

Monzer says, “Moving to America and getting adjusted to the life in the US has made me more open-
minded. I just love how open minded and accepting people are here in America. I actually celebrated
pride month with my friends to support one of our lesbian friends, something I could never do in Syria. I
now also have Jewish and LGBTQ+ friends, something I also could never have done in Syria.”

Monzer continued with, “Your beliefs are mostly from your environment. And once you meet new people
and get expose to new surroundings, and your beliefs begin to change with that.”